The DataCareer Job Market Index: Get monthly updates on the data job situation in Germany, Switzerland, and beyond! 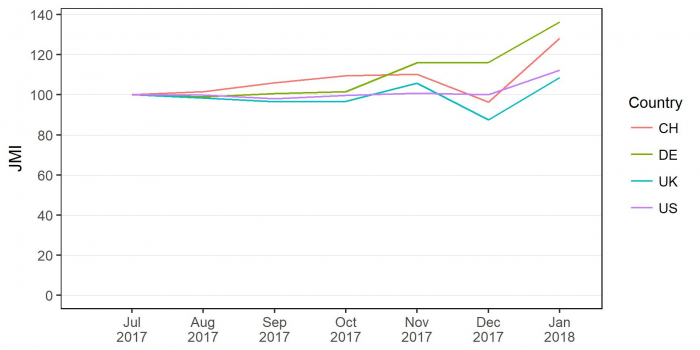 Demand for professionals in data science and analytics is expected to rise significantly over the next years (cf. this study by IBM). In order to keep track of future job trends, we started the DataCareer Job Market Index (DJMI) in July 2017. We track job openings on the biggest online job board, Indeed, in the fields of data science and analytics, data engineering, business intelligence, artificial intelligence and statistics. Sign up for our newsletter if you’d like to receive a monthly summary of the results.

The search is performed at the end of each month, with only jobs from the last 30 days being included. Using this method, how accurate can our job market estimates be expected to be? While we are likely to underestimate the absolute number of jobs, the relative changes we record over time should provide a very accurate measure of job trends. We therefore indicate relative changes compared to the reference point of July 2017, which is set to 100 in our market index.

In Switzerland, data job ads increased by 28% between July 2017 and January 2018. The drop in December (-13%) can likely be explained as a seasonal fluctuation, given that companies publish less job openings during the holiday season. During our reference month, July 2017, the index included 544 jobs.

If we consider the job counts for January 2018 and relate them to population size, we get the following number of jobs per million inhabitants: 125 for the US, 125 for the UK, 81 for Switzerland, and 41 for Germany. However, these numbers should be taken with caution, as the percentage of jobs that are published on Indeed may differ between the countries. We’re currently conducting research into open questions such as the popularity of Indeed in each country and the factor by which Indeed-based estimates underestimate the total number of jobs.

For questions, comments or if you’d like to collaborate on our research, don’t hesitate to send us an Email at info@datacareer.ch.