Neural Network: How does it work?

Curious about neural networks and deep learning? This post will inspire you to get started in deep learning. Why are we witnessing this kind of build up for neural networks? It is because of their amazing applications. Some of their applications include image classification, face recognition, pattern recognition, automatic machine translation, and so on. So, let’s get started now.

Machine Learning is a field of computer science that provides computers the capability to learn and improve from experience without being programmed explicitly. Deep learning is a form of machine learning that uses a computing model that is highly inspired by the structure of the brain. Hence, we call this computing model as a Neural Network.

This article explains the concept of neural networks and why they are a vital component in the process of deep learning. It also helps to let you know:-

Depending on the strength of internal data patterns and the nature of the application, you can usually expect a network to train well. This is applied to problems where the relationships may be quite nonlinear or dynamic. Very often, the conventional techniques are limited by strict assumptions of variable independence, linearity, normality, etc.

As neural network can capture various types of relationships, it enables the user to relatively easily and quickly model phenomena which otherwise may have been impossible or very difficult to explain.

Working of a Neural Network

Neural networks are modeled after the neuronal structure of the brain’s cerebral cortex but on smaller scales. They are usually organized in layers. Layers are comprised of many nodes which are interconnected and contain an activation function. The patterns are presented to the network through the input layer.

The information flows via a neural network in 2 ways. When the neural network is operating normally (after its training) or learning (during training), the information patterns are fed into the network through input units. These input units will trigger the hidden unit layers and these in turn will arrive at the output units. This design is considered as the feedforward network. 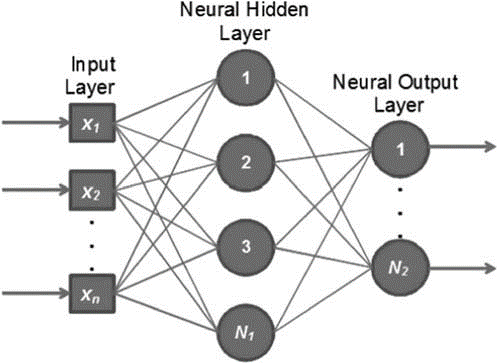 Working of a Neural Network - Training

Training a neuron involves applying a set of steps to adjust the thresholds and weights of its neurons. This kind of adjustment process (also known as learning algorithm) tunes the network so that the outputs of the network are very close to the desired values. The network is ready to be trained once it is structured for a specific application. The initial weights are selected randomly to begin this process. Then, the training or learning starts.

In unsupervised training, the network must make sense of the inputs without the help from outside. To put this in familiar terms, let’s consider an instance. Your kids are called supervised if you provide a solution to them during every situation in their life. They are called unsupervised if your kids make decisions on their own out of their understanding.

Neural networks use various kinds of learning rules. They are as follows.

Hebbian Learning Rule - This learning rule determines, how to alter the weight of nodes of a network.

Perceptron Learning Rule - The network begins its learning by allocating a random value to each weight.

Delta Learning Rule - The modification in a node’s sympatric weight is equal to the multiplication of input and the error.

Correlation Learning Rule - It is the supervised learning.

Outstar Learning Rule - It can be used when it assumes that neurons or nodes in a network are arranged in a layer.

The primary neural network models are as follows.

Both the above models are supervised learning networks, and they are used with one or more dependent variables at the output.

Kohonen Network - This is an unsupervised learning network. This is used for clustering process.

As I stated earlier, the procedure used to perform the learning process in a neural network is known as the training algorithm. There are various training algorithms with different performance and characteristics. The major ones are Gradient Descent (used to find the function’s local minimum) and Evolutionary Algorithms (based on the concept of survival of the fittest or natural selection in biology).

Deep Neural Networks can be thought of as the components of broader applications of machine learning that involve algorithms for regression, classification, and reinforcement learning(a goal-oriented learning depending on interaction with the environment).

These networks are distinguished from single-hidden-layer neural networks by their depth. This implies the number of node layers through which the data passes in a pattern recognition’s multi-step process.

Conventional machine learning depends on shallow networks that are composed of one output and one input layer with at most one hidden layer in-between. Including input and the output, more than three layers qualify as ‘deep’ learning.

A deep neural network is shown in the below figure which has three hidden layers apart from the input and output layers. Hence, deep is a technical and strictly defined term that implies more than one hidden layer. Based on the previous layer’s output, each layer of nodes trains on a different feature set in deep neural networks.

Unlike most traditional machine learning algorithms, deep neural networks carry out automatic feature extraction without intervention. These networks can discover latent structures within unstructured(raw data), unlabeled data which is the majority of data in the world.

Applications of Neural Networks in Python and R

Theano is an open source project released under the BSD license. At its heart, Theano is a compiler for mathematical expressions in Python. It knows how to take your structures and turn them into very efficient code that uses NumPy, efficient native libraries like BLAS and native code (C++) to run as fast as possible on CPUs or GPUs. It uses a host of clever code optimizations to squeeze as much performance as possible from your hardware.

The actual syntax of Theano expressions is symbolic, which can be off putting to beginners used to normal software development. Specifically, expression are defined in the abstract sense, compiled and later actually used to make calculations.

It was specifically designed to handle the types of computation required for large neural network algorithms used in Deep Learning. It was one of the first libraries of its kind and is considered an industry standard for Deep Learning research and development.

TensorFlow is an open source library for fast numerical computing. It was created and is maintained by Google and released under the Apache 2.0 open source license. The API is nominally for the Python programming language, although there is access to the underlying C++ API.

Unlike other numerical libraries intended for use in Deep Learning like Theano, TensorFlow was designed for use both in research and development and in production systems, not least RankBrain in Google search and the fun Deep Dream project. It can run on single CPU systems, GPUs as well as mobile devices and large scale distributed systems of hundreds of machines.

It’s easy to classify TensorFlow as a neural network library, but it’s not just that. Yes, it was designed to be a powerful neural network library. But it has the power to do much more than that. You can build other machine learning algorithms on it such as decision trees or k-Nearest Neighbors. You can literally do everything you normally would do in numpy! It’s aptly called “numpy on steroids.”

The caret package is a set of tools for building machine learning models in R. The name “caret” stands for Classification And REgression Training. As the name implies, the caret package gives you a toolkit for building classification models and regression models. Moreover, caret provides you with essential tools for data splitting, pre-processing, feature selection, model tuning using resampling, variable importance estimation as well as other functionality.

There are many different modeling functions in R. Some have different syntax for model training and/or prediction. The package started off as a way to provide a uniform interface the functions themselves, as well as a way to standardize common tasks (such parameter tuning and variable importance).

Caret provides a simple, common interface to almost every machine learning algorithm in R. When using caret, different learning methods like linear regression, neural networks, and support vector machines, all share a common syntax (the syntax is basically identical, except for a few minor changes).

Moreover, additional parts of the machine learning workflow – like cross validation and parameter tuning – are built directly into this common interface. To say that more simply, caret provides you with an easy-to-use toolkit for building many different model types and executing critical parts of the ML workflow. This simple interface enables rapid, iterative modeling. In turn, this iterative workflow will allow you to develop good models faster, with less effort, and with less frustration.

There are many ways to create a neural network. You can code your own from scratch using a programming language such as C# or R. You can also use a tool such as the open source Weka or Microsoft Azure Machine Learning. The R language has an add-on package named nnet that allows you to create a neural network classifier. The nnet R package has been created by Brian Ripley. You can evaluate the accuracy of the model and make predictions using the nnet package.

The functions in the nnet package allow you to develop and validate the most common type of neural network model, i.e, the feed-forward multi-layer perceptron. The functions have enough flexibility to allow the user to develop the best or most optimal models by varying parameters during the training process.

Neural networks have broad applicability to business problems in the real world. They are currently used applied in various industries, and their applicability is getting increased day-by-day. The primary neural network applications include stock exchange prediction, image compression, handwriting recognition, fingerprint recognition, feature extraction, and so on. But, there is a lot more research that is going on in neural networks.

Author: Savaram Ravindra is a writer on Mindmajix.com working on data science related topics. Previously, he was a Programmer Analyst at Cognizant Technology Solutions. He holds a MS degree in Nanotechnology from VIT University